The San were among the first human inhabitants of this region before the Setswana migrated southwards and slowly occupied the region from the 16th century onwards, until early in the 19th century. By mid-century missionaries arrived, including David Livingstone and Robert Moffat, and by 1885 the territory was a British protectorate. Botswana gained its independence in 1966 and has since been the most stable democracy in Africa. The first president ruled from 1966 until his death in 1980, the second until 1994, having been re-elected twice, before resigning and the third from 1998.

The country has a strong currency with one of the highest per capita incomes in Africa and maintains a neutral international political stance. It is heavily reliant on mining, especially diamonds and tourism and maintains close ties with its neighbour South Africa, an economic powerhouse for the region.

A Botswana safari is top-notch. Wildlife is abundant in Botswana and includes lion, giraffe, leopard, antelope, elephant, crocodile and ostriches. Botswana is semiarid and has an average annual (summer) rainfall of 640 mm (about 25 in) in the north to less than 230 mm (less than 9 in) in the Kalahari. Drought is therefore not uncommon and the vegetation is mostly savannah.

Geographically Botswana is relatively flat, the average elevation of about 1000 m and can be viewed essentially as three major regions as follows:

Chobe National Park in the north, another outstanding wilderness area of enormous diversity – lion and elephant can be viewed from river cruises or 4×4 game drives, excellent for a Botswana safari.

The Okavango Delta is a vast marshland and one of the largest inland river deltas in the world – 15 000 km2 of wilderness and prime Botswana safari area. The Kalahari Desert in the central and southwestern regions occupies over half the land area of Botswana. It is a mystical, harsh and unspoiled landmass.

The saltpans of north-central Botswana and the Tuli block in the far eastern corner of Botswana are also areas of significance and can add a significantly different experience to your Botswana safari.

A perfect combination that makes a great add-on to any Southern Africa Safari.  Enjoy two days taking in the sights of Victoria Falls including a tour of the falls and...

The casual visitor to Botswana could be excused for seeing the country as kilometre upon kilometre of flat, desolate scrubland with little or no surface water. But on closer inspection,...

The casual visitor to Botswana could be excused for seeing the country as kilometre upon kilometre of flat, desolate scrubland with little or no surface water. But on closer inspection,...

Head to northern Namibia and Etosha National Park, famous for its vast amount of wildlife and unique landscape. Continue to travel through the Caprivi Strip and on to explore the...

The Kalahari Desert offers untamed Africa in its most untouched state. This arid to semi-arid landscape is not what one would commonly associate with a desert, featuring areas of flat grasslands and acacia trees with huge tracts of excellent gazing after good rains. The san Bushmen inhabited these lands for over 20,000 years, roaming as nomadic travellers, taking only as needed from this harsh dry landscape.

Chobe is approx 11 000 km2 of wilderness area watered by the Chobe & Savuti Rivers and thus attracting huge concentrations of game. This includes lion and some of the highest concentration of elephant in Africa – an estimated population of around 25 000 in winter. Game viewing is renowned and in the Northern areas near Kasane, both the riverboat game viewing experience and the 4x4 vehicle option are popular.

In 1989 a group of Serowe residents conceived the idea of a wildlife reserve near Serowe. Serwe Pan, then a cattle post, had been a traditional hunting area teeming with wildlife and the residents wished to re-establish it to its earlier splendour. In 1993 the Ngwato Land Board allocated the land around Serwe Pan to the Khama Rhino Sanctuary Trust.

In the centre of the Okavango Delta is the Moremi Wildlife Reserve, a 3,000 km2 paradise. Proclaimed a wildlife reserve by the Tswana people in 1963, Moremi is undoubtedly one of the world's most pristine wilderness areas. The foresight of the local community has ensured that nature has flourished undisturbed, offering a glimpse of the divine, a veritable Garden of Eden.

Situated in Northern Botswana, Nxai Pan is mainly forest and savanna woodland and large areas of open grassland. Nxai Pan is located North of the Makgadikgadi Pans and it was itself was once part of the old Makgadikgadi lakebed. The Makgadikgadi lake started drying up almost 10,000 years ago. As the water evaporated, huge salt-encrusted pans were left. In Nxai Pan National Park two of these Pans - Nxai (a fossil lake bed about 15 km wide and covered with short grass), and Kgama-Kgama Pan are located.

The Okavango Delta in northern Botswana (near Maun) incorporates the Moremi Game Reserve and is a unique wildlife paradise - one of the finest in the world. It is also one of the largest inland river deltas in the world. This unsurpassed natural environment is a maze of waterways, islands and reed banks creating a perfect habitat for lion, elephant, leopard, buffalo, giraffe, hyena, wild dog, kudu, impala, roan, zebra, lechwe, hippo and crocodile, amongst others.

Savute, a remote and wild corner of the Chobe National Park is situated south of the Chobe River. This is an area of open savanna grassland through which a seasonal river used to spill out into a marsh. It last flowed in the 1980s. Today, the channel and marsh are usually dry except after heavy rains, but several artificial waterholes offer breathtaking wildlife viewing. The landscape of Savute, with its almost desert-like feeling, is strikingly different from the lush Chobe riverfront.

The lesser-known Makgadikgadi Pans National Park is situated between Maun and Nata in Botswana. The shimmering saltpans of Makgadikgadi are the size of Switzerland and most of the time appear as a glaring, white, endless plain. When the rain comes a dramatic change takes place as the pans come to life with frantically feeding water birds and great herds of game. The best time to visit this area to coincide with the migration is from December to March or in the dry season from April to October when the pans are dry.

The Tuli Block integrates the Mashatu Game Reserve, Tuli Nature Reserve and other smaller game reserves. The wildlife that can be viewed here include Elephant, Kudu, Impala, Wildebeest, Giraffe, Lion (some black-maned), Zebra, Leopard, Waterbuck, Eland and Cheetah. Some of the creatures that can be seen at night include Caracal, Aardwolf, Hyena and Jackal. 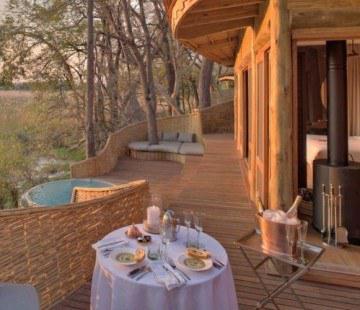 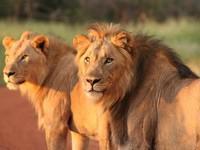 The Linyanti region is the name given to a vast and remote area in one of the least visited locations in Botswana which has been a popular location for many wildlife safari television series. 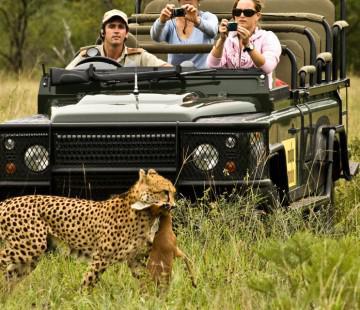 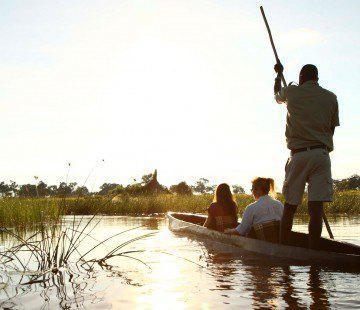 All About the Okavango Delta

The Okavango Delta is situated in the Kalahari Desert in Botswana. It is the largest inland delta in the world covering an area of about fifteen thousand square kilometers.